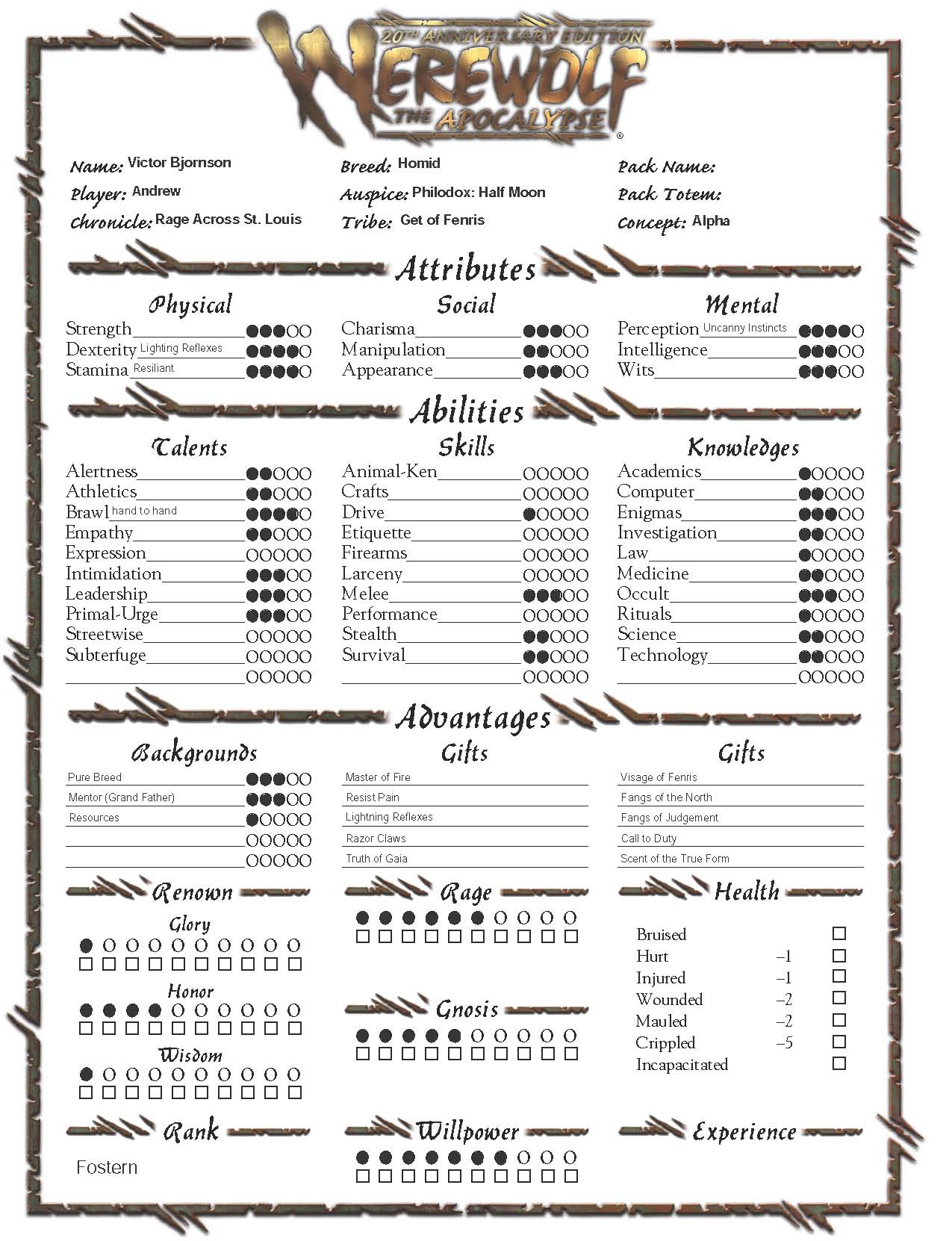 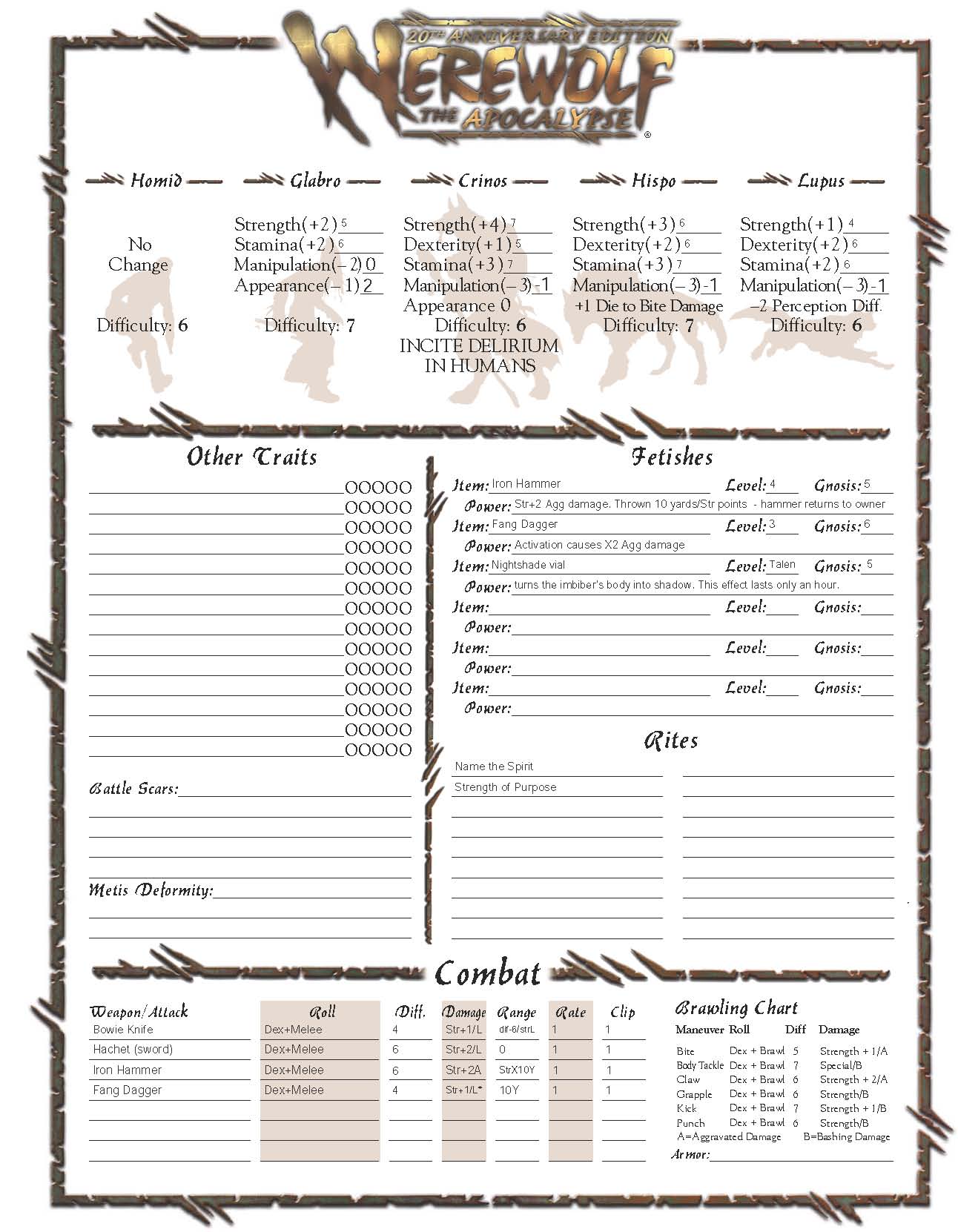 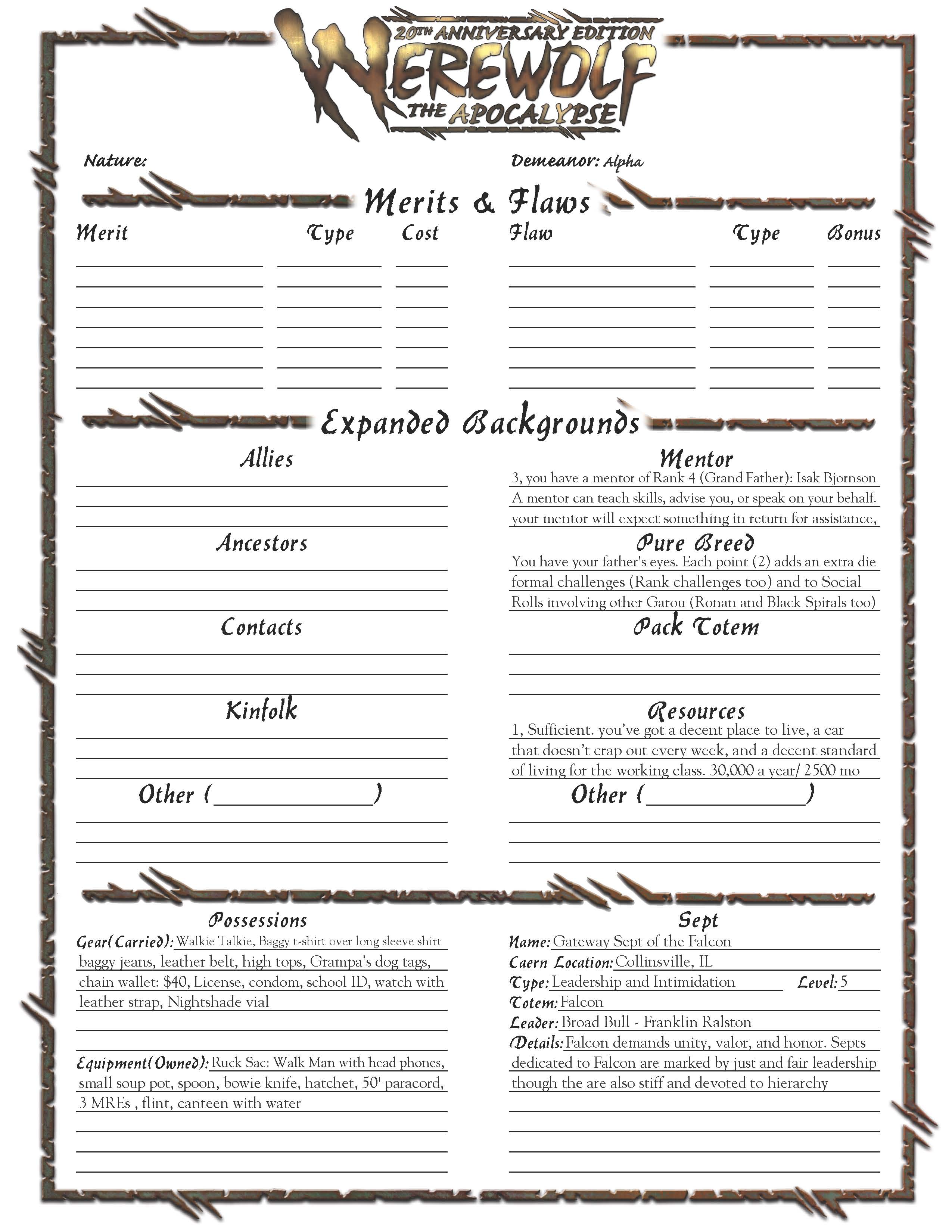 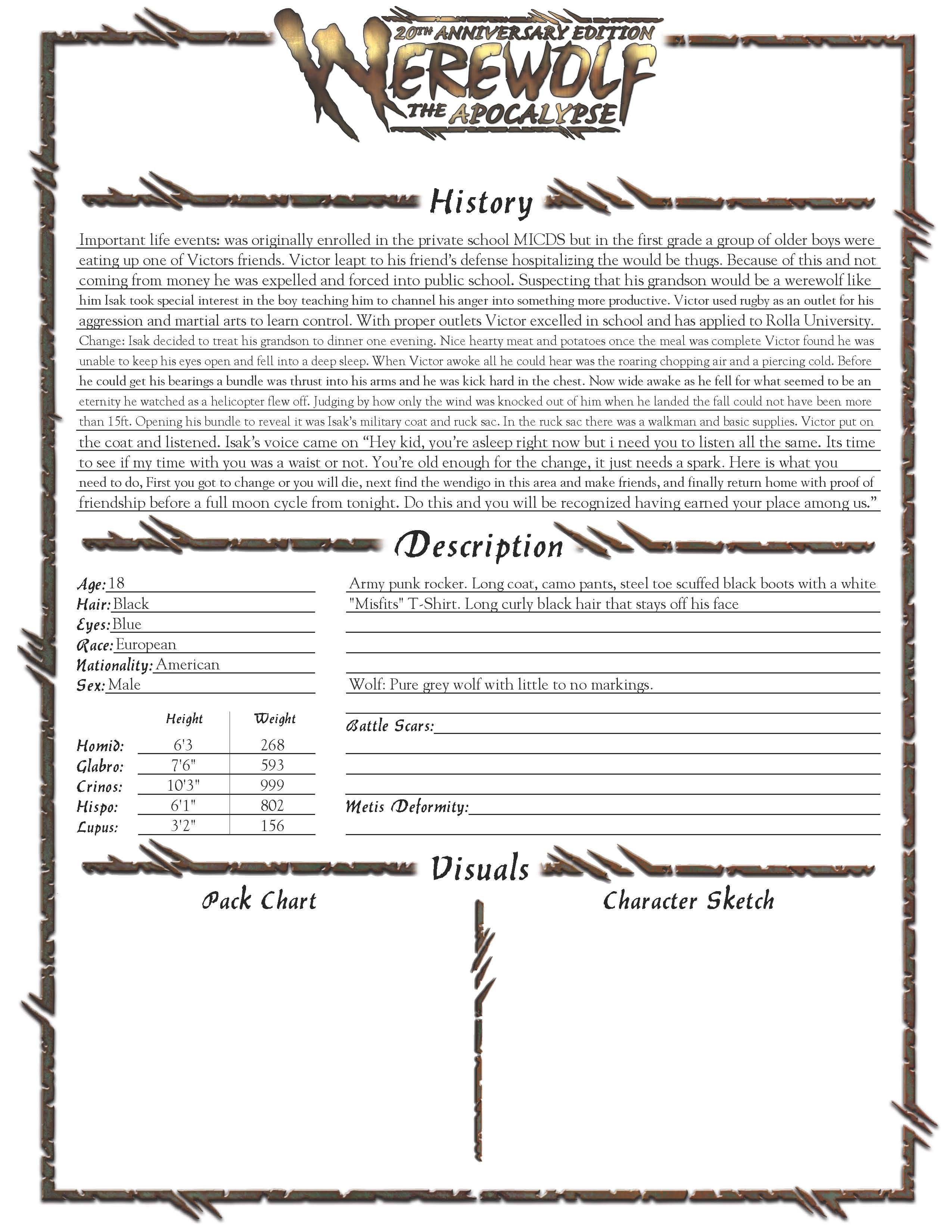 Homid Philodox Get of Fenris

“A body is useless without a mind, A mind is only as healthy as the body”

Mentor (Grand Father): Isak Bjornson immigrated to America from Scandinavia as a child and grew up in Dog Town St. Louis. He grew up loving his new home so much he lied about his age to join the marines and fight in WW2. It was during this time that he underwent his first change on a battle field. He is vague on the exact details as the change did result in the deaths of his squad.

Important life events: was originally enrolled in the private school MICDS but in the first grade a group of older boys were beating up one of Victors friends. Victor leapt to his friend’s defense hospitalizing the would be thugs. Because of this and not coming from money he was expelled and forced into public school. Suspecting that his grandson would be a werewolf like him Isak took special interest in the boy teaching him to channel his anger into something more productive. Victor used rugby as an outlet for his aggression and martial arts to learn control. With proper outlets Victor excelled in school and has applied to Rolla University.

Change: Isak decided to treat his grandson to dinner one evening. Nice hearty meat and potatoes once the meal was complete Victor found he was unable to keep his eyes open and fell into a deep sleep. When Victor awoke all he could hear was the roaring chopping air and a piercing cold. Before he could get his bearings a bundle was thrust into his arms and he was kick hard in the chest. Now wide awake as he fell for what seemed to be an eternity he watched as a helicopter flew off. Judging by how only the wind was knocked out of him when he landed the fall could not have been more than 15ft. Opening his bundle to reveal it was Isak’s military coat and ruck sac. In the ruck sac there was a walkman and basic supplies. Victor put on the coat and listened

Isak’s voice came on “Hey kid, you’re asleep right now but i need you to listen all the same. Its time to see if my time with you was a waist or not. You’re old enough for the change, it just needs a spark. Here is what you need to do, First you got to change or you will die, next find the wendigo in this area and make friends, and finally return home with proof of friendship before a full moon cycle from tonight. Do this and you will be recognized having earned your place among us.”

Don’t worry I’ve got some bones to throw you kid. We did you a favor and dropped you in the wendigo’s territory. Quick note on that, they are not a fan of outsiders and really don’t like non-werewolfs so you will want that change before meeting them.

Im going to level with you kid. Normally we do this in groups, but I didn’t raise you to be normal. You need to be exceptional. We have plenty of soldiers, those soldiers need dependable leaders they can look up to. Make me proud.

On his second night Victor is attached by a bear that mauls him to near death before victor changes and returns the favor to the bear devouring his first kill in his new form
A few days later he meets the wendigo who give him a task to earn their friendship. After completing the task they present him a stone about the size of a football covered in runes and inform him that he has been in Canada just north of Ogoki in the Ontario territory and allow him to rest before setting off back home. That night Victor has a dream

Upon waking Victor is filled with a new diver to find the compass, an almost consuming fixation. Victor heads out before first light. He crosses the boarder Lake Superior and stows away on a freighter heading down to the Gulf of Mexico. He gets off as the boat sails through St Louis and washes up on the IL side of the river. While he knows his destination is only an hour west Victor feels a pull east not far from him. “I still have a few days he thinks” and makes his way towards the force that draws him.